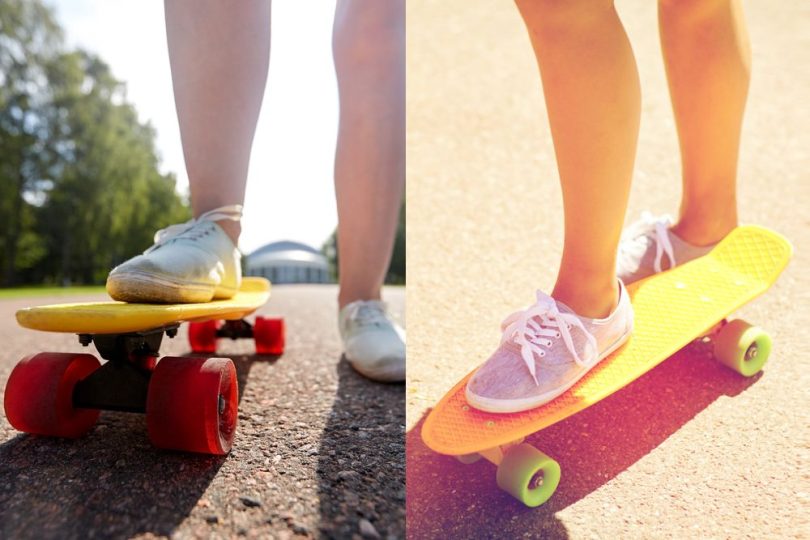 When skating, a goofy stance means you’re putting your right foot forward while a regular stance is doing the opposite. Many actually can use both stances and contrary to popular belief, it has nothing to do with you being left-or right-handed.

Today, we’re discussing the differences between goofy and regular stance and how you can find the perfect stance for you.

The regular stance refers to using your left foot forward while riding a skateboard. This stance helps distribute your body weight across the board. A small majority of skateboarders (around 56%) use this stance.

The change of stance doesn’t provide a competitive advantage. It’s just how your brain is wired. Neither one is better. It’s not a choice, and it doesn’t have any relation with you being left/right-handed.

Being goofy on a skateboard means you’ll place your right foot on the front side of the board. The term “goofy” comes from the famous Disney cartoon Goofy who was once seen riding a wave on a surfboard. The stance Goofy took became the expression of how you ride your board.

Goofy riders push the board forward with their left foot. There are some who can easily switch between the goofy stance and the regular stance.

Ultimately, which stance you choose will depend on your personal preference.

Aside from your personal preference, there is none. Your body already has a stance. You just need to figure it out. Most of you probably know it, one of your legs will be more comfortable than the other. If that is your right leg, you’re goofy and if it’s your left leg, you’re a regular.

As said before, selecting your stance isn’t a choice. You can’t force your way around it unless you have the ability to switch stance instantly. Just a simple trial and error will help you find your body’s preferred position.

You’ll feel more comfortable stabilizing your body with your dominant foot. If you’re still not convinced, watch the pros:

And if you’re one of the rare ones that can ride both in a regular and goofy stance, give yourself a pat! You really are a special breed!

How to Find Your Stance?

This is, most probably, the most known way to find your stance. The foot you use to kick a football is your dominant foot. If you use your left foot, you’re a goofy rider. Regular skateboarders use their right foot to kick a football.

The best way to figure out the perfect stance for you involves switching up your foot. If you know you’ll kick the ball with your right foot, use the left one instead. Make a couple of trials and errors till you find the most natural stance.

Slide on A slippery floor In your socks

This is most probably the easiest way to find your stance. You just have to put on your socks, and try to glide over your hardwood or tile floor. Start by doing a short sprint, jump, and then try to land sideways on your feet. Your face should be in the sliding direction.

That’s about it. You’ll use your dominant foot to provide stability to your body as you glide over the floor. Do this a couple of times and you’ll know which leg is dominant. If you use your right foot, you’re most likely a goofy rider.

However, this method isn’t always accurate. There are people who are equally comfortable using their left and right foot. In that case, try another technique.

Our next trick is to make you fall on your face. No, you don’t have to break your nose trying to find your skateboarding stance. What you need to do is, catch yourself with your foot. You can apply this technique even in your bedroom.

The leg that’ll extend out first to catch you will usually be your dominant leg. If your right foot catches you, you’re a regular rider. For the goofy riders, their left foot will catch them.

Have someone push you

This is one of the oldest and easiest tricks in the book you can apply to find your riding stance. Just like falling forward, you’ll try to catch yourself falling. The difference is that you’ll need help from another person.

Just close your eyes and ask your friend to give you a gentle push from behind. The foot catching you is your dominant foot. The key here is to be spontaneous. Don’t overthink too much, or you’ll ruin the results.

You can also use a staircase to determine your stance. People put their dominant foot first while climbing a stair. We do it subconsciously. If you climb the stairs left foot forward, you’re goofy. If you use your right foot before, you’re most probably a regular rider.

If you feel comfortable switching your stance, you’re a rare breed. You’ll most probably be able to perform epic stunts and tricks once you master skateboarding.

1. Does being a lefty matter in skateboarding?

Ans: No. Even the dominant foot doesn’t always become the user’s actual stance. There is also no direct link between your handedness and your footedness. However, statistically, right-handed people are more on the regular stance.

2. How many skaters ride goofy?

Ans: There is no data to strongly support or deny that claim. A small study in the Tampa Skatepark, FL, USA suggests around half (44%) of skateboarders ride in a goofy stance and the other 56% are regular riders.

3. What are the other skateboard stances?

Ans: We’ve known about the natural (goofy and regular), and switch in riding a skateboard. There are 2 more stances: The Nollie, and the Fakie. Nollie is when you follow your stance but stand on the front side of the board. The Fakie is riding in your natural stance, just in reverse.