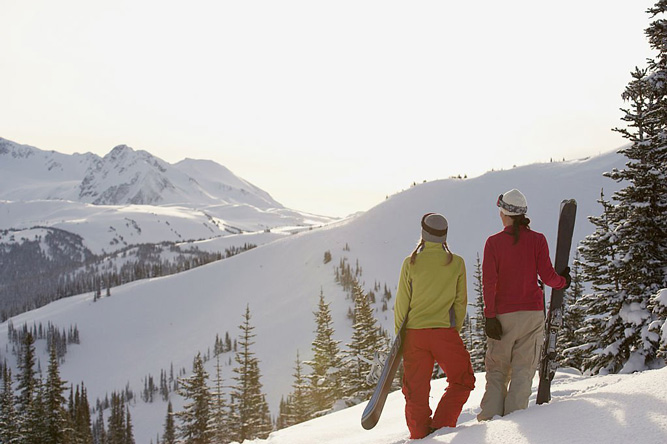 It’s important to consider your weight and height when choosing which size snowboard to buy. You measure snowboard lengths from tip to tail in centimeters.

Stand your board up next to you vertically, which will help you compare the board’s height with your chin.

Things You Need to Know Before Measuring a Snowboard

There’s no better snowboard profile than camber. As far as camber styles go, it remains the most popular. In traditional cambered boards, the center of the board is curved.

When no additional weight is applied, it comes down and touches the ground.

The snowboard’s base is the Bottom side of the snowboard or the part of the board that touches the snow.

To maintain precise edge hold, edges should be sharpened regularly. It’s critical if you want to get vertical in the pipe or rip groomed runs.

Dulling your edges is also common if you plan on only riding parks and street setups.

Generally, cambered shape boards have three to four inches long contact points located at the tip and tail of the board.

Between the two bindings, the board’s flex point is located. This is where the board starts and ends, flexing and allowing it to touch the sidecut radius.

The length of the base edge is the effective edge. This connects with the board when it is flat sitting on the snow.

The tail and tip of the snowboard is the edge/base that is non-effective. 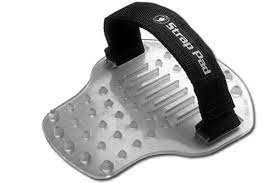 Rubbers pads called stomp pads or nonskid pads can be attached to the backfoot binding of your snowboard to prevent skidding.

On a snowboard, the tip or nose is the front end. The side that is turned up higher on your snowboard is usually the nose if your snowboard has an identical front and back.

Snowboarders with boots larger than 11 need a wide board. The boards have a wider waist width as they are made to keep big-footed riders from the snow when the snowboard goes on the edge.

Riders who focus on freestyle will choose shorter boards to reduce weight and make tricks easier.

Since they will mostly ride at moderate speeds and on intermediate runs, they do not need extra edge hold or stability.

The overall length is the tip of the snowboard right to the tail and is measured in centimeters.

Transitioning into turns is smooth with the egg-shaped arc, and exiting turns is aggressive.  A Progressive Sidecut snowboard is like accelerating out of turns.

A board’s nose and tail have a larger sidecut, and the center has a smaller sidecut. This provides large arcs and small arcs in turns.

Multiple Sidecut boards have a combination of radiuses that benefit riders at low and high speeds.

The toeside edge tilts with foot/ankle flexion and extension movements, so it’s easier to manage a toeside turn than a heelside turn.

Toeside turns are easier to control than heel sides. Asymmetrical Sidecuts have been created due to the body’s asymmetrical shape along its Y-axis.

This Is How You Measure Your Snowboard

Standing a snowboard vertically and comparing its height to your chin will give you an idea of the length you need.

The board you’re looking at is usually within your size range if it’s between your chin and nose.

Here we have a snowboard size chart that can help you determine the correct size of board for weight.

Snowboards come in different shapes, and which one you choose will be determined by what type of riding you are doing.

You should choose the one most suitable for the environment you are riding in.

The asymmetrical shape with the same size tail and tip and a directional core with a softer tip are quite common.

Freeride and powder boards most often feature these profiles but they are often found on all-mountain boards as well.

You’re more likely to stay afloat in powder with them since they have a wider, softer nose.

The short and wide profile of volume-shifted boards makes them easy to identify.

Keeping your nose on top of the snow and pushing your weight backward gives them their name. These boards are easier to maneuver around trees.

An estimated height to board length ratio can be calculated using a simple formula.

To work it out on a calculator, put your height in inches then times (x) that by 2.54 (x) 0.90, and that will give you an estimate for the board length in CM. 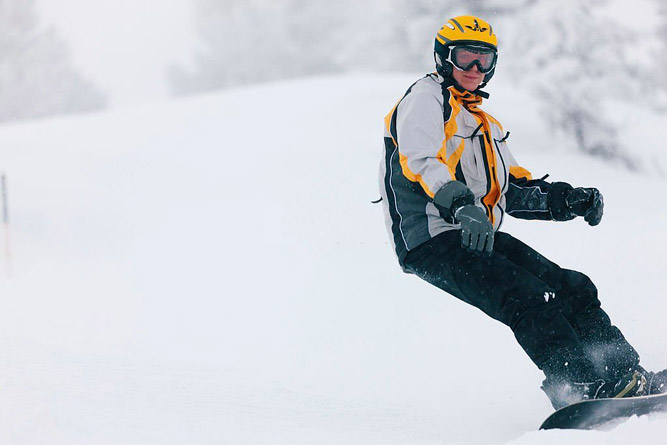 These boards allow riders to express themselves more expressively while riding, performing tricks, and jibbing with a medium to soft flex.

These are built with a base construction and bomber edge that withstand rails’ impact. 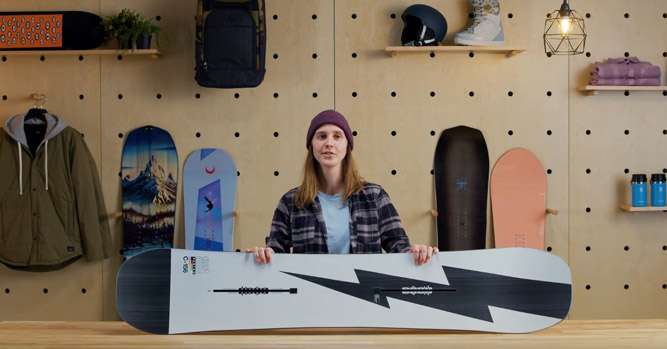 An all-mountain snowboard is a board designed for riding all types of terrains and riding styles.

If you want to ride the entire mountain, you should consider all-mountain snowboards rather than specialized niche boards. 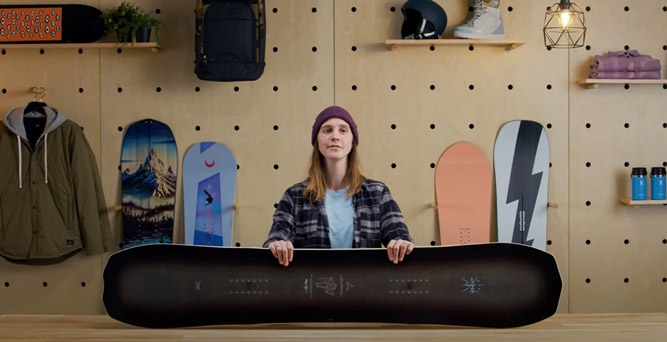 When it comes to riding steep terrain and soaking up deep snow, powder/freeride boards shine. A variety of snow conditions enable them to offer a smooth, steady ride at high speeds.

Like street shoes, snowboard boots must be sized properly to ensure a good fit. In order to prevent poor circulation, the inside of your boots should be snug but not pinching or poking your feet.

You should be able to make your toes move a little but they shouldn’t be able to go forward or backward.

Choosing the right size snowboard starts with considering your height and weight. The length of a snowboard is measured from tip to tail in centimeters, not inches.

Standing up a snowboard vertically, and comparing the height to your chin, will give you a general idea of the snowboard size you need.

A snowboard’s bent shape will impact how it rides and how it should be sized, whether it’s a rockered, cambered, or flat top.

For the intermediate snowboarders

When using the recommended binding position, the height of the position is measured between each foot. This is measured in inches.

A snowboard’s product details will include this number. Your stance width should be roughly shoulder-width, depending on your riding preferences.

The binding position on a snowboard is determined according to its location in relation to its center.

The measurement (if available) is usually given as an inch but can also be given as a millimeter. The recommended stance is usually zero or negative.

Whatever you’re doing, whether you’re riding a park board, surfing powder, or gripping groomers, choose a board that matches your preference.

Each snowboard size normally comes with a weight recommendation, which can be found in the product details or on the board’s sticker. Boards relating to the range described should work well.

It is important to know the size of your snowboard boots and snowboard bindings since these determine the waist width you will need.

If you’re a beginner snowboarder, you’re probably going to be riding groomed slopes most of the time.

Opt for an all-mountain board and stay away from special shapes and profiles until you have it more down pat.

People with boots smaller than a size 7 need narrow snowboards.

Beginners and free-riders use narrow snowboards as the width is not as important.

Snowboards with a wider width are extra stable. On the other hand, wide snowboards are less responsive and hard to turn.

In addition to being heavy and difficult to turn on, wide snowboards are also less stable and may cause heel or toe drag.

Wide snowboards are usually over 260 mm narrow snowboards have a size range between 235 to 245 mm.

How Does Snowboard Shape Impact Performance?

Each shape will determine how the board moves. A flat means you have more stability as it won’t move around too much, and a rocker flat has a design that helps keep you stable and from catching on to anything.

Tips for Measuring a Snowboard

1. Are snowboard sizes for men and women the same?

Ans. Women’s and men’s snowboards are very similar in size, but those small differences can be hugely important. Always individually test for sizing.

Kevin started off his career as a mechanical engineer at a scooter manufacturing company back in 2012. He’s been into kick scooters and swimming from the early years of his life. Over time, he quit the latter for the love of the former and soon started to be recognized as a kick scooter expert. He wanted to take kick scooter design professionally but his family forced him to study engineering. Luckily, he decided to study mechanical engineering. That made way for him to work in the field of kick scooter designing as a core researcher and developer. Kevin is also one of the founding members of Scooterlay and contributes to the website as the head of the kick scooter research team. He is currently working on his first book on the basics of kick scooter riding. This is a guide for beginner riders and will soon be published by Warner House Press, Arizona.