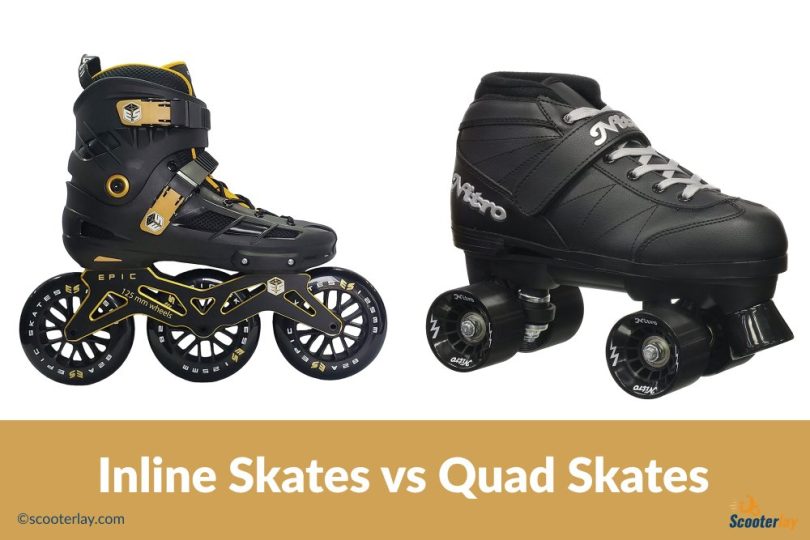 Inline skates have been around for years, being the very first experiment of any “roller blade.” They were based off of an ice skate.

Quads came later, where they were created with a different wheel pattern and for different types of skating. While similar, these two types of skates vary in appearance and uses in many ways.

So how exactly do they differ? We’re here to help!

Inline Skates vs Quads: How Do They Differ?

Where are the Wheels?

How Difficult is it to Stop?

Inline skates have a brake on the heel of the blade while quad skates use the front of the toe for their brake. Balance-wise, inline skates win again for this one; i.e., it’s easier to lift your toe up to stop than to lift your heel. There is less chance of falling while stopping using the heel stop!

If you’re an ice skater, stability on inline skates and the support they give the ankle is geared more for you. With a wider base to stand on with the wheels spread out, quads give you more stability due to the wheel orientation.

Weight: Which Skate is Heavier?

Inline skates can weigh anywhere between 2.5-3.5 pounds, while quad skates range from 1-3 pounds. With quad skates weighing less on average, they are the lighter skate to put on your feet.

Which Skate Makes Me Faster?

Inline skates provide a base that is geared more towards speed while quads are more about stability. If you want speed, get yourself a pair of inline skates.

Which Skates Are Easier to Maneuver?

How Much Effort to Put in? 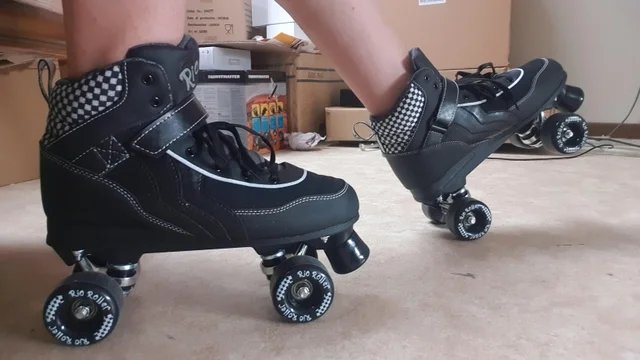 Inline skates are considered more of a fitness skate while quads are more for beginners that require much less effort to get yourself moving. If you want something that requires less effort, quad skates are for you.

Inline skates are good for beginners if you’ve already ice skated. Quads are an easier skate to learn all around even if you have no experience. If you’re just getting into skating, quad skates will be the skate you want to learn on.

What About the Stress It Puts on My Body?

Inline skates provide ankle support but are generally made for fitness and the working out of your muscles. Quad skates will give you more overall ankle support because of how they’re set up.

How Similar is Skating to Ice Skating?

Well, inline skates are built almost identical to ice skates with a thin blade of wheels. Quad skates, however, are built very differently due to the wheel location and lack of blade. If you’re an ice skater, you’re going to do better on inline skates because of the similarity in build.

Which Skate Do I Wear Skating Outside?

Do I Need Skill to Inline/Quad Skate? 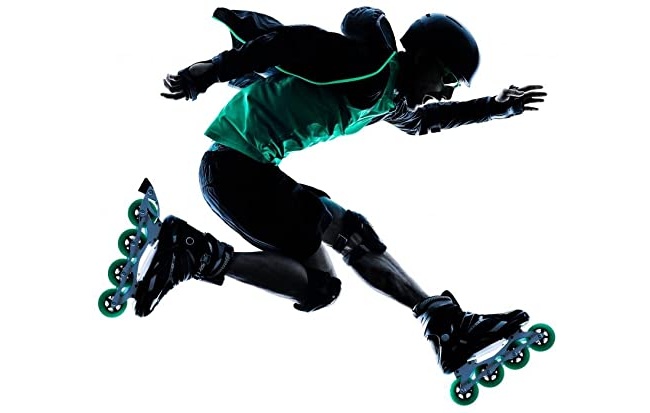 Yes, you do need a little bit of skill! Inline skates require more balance and ability to move your body on your own, while quad skates give more stability and are better for someone learning to skate.

Quads are more of the artistic, jam, and rhythm/shuffle skating type of skate. The quad’s stability makes it easier for you to perform tricks and the artsy style of skating.

What’s the Cheapest Type of Skate?

Unless you’re looking for the high-end, hockey skate looking, inline skate, price-wise inline skates are generally cheaper than quad skates. The high-end inline skates can run close to, if not more than the price of quads.

Inline Skates vs Quads: Which One to Try?

If you’re looking for speed, fitness, and an outdoor adventure, inline skates are the skates you should have.

However, if you’re looking for something to use on a rink, come up with some intense tricks, or put your artsy skating style to use, grab yourself a pair of quad skates.

1. Can I inline skate as an ice skater?

Kevin started off his career as a mechanical engineer at a scooter manufacturing company back in 2012. He’s been into kick scooters and swimming from the early years of his life. Over time, he quit the latter for the love of the former and soon started to be recognized as a kick scooter expert. He wanted to take kick scooter design professionally but his family forced him to study engineering. Luckily, he decided to study mechanical engineering. That made way for him to work in the field of kick scooter designing as a core researcher and developer. Kevin is also one of the founding members of Scooterlay and contributes to the website as the head of the kick scooter research team. He is currently working on his first book on the basics of kick scooter riding. This is a guide for beginner riders and will soon be published by Warner House Press, Arizona.