You could be recovering from a surgery or an injury spotted on your ankle, knee, or foot region –using a knee walker or crutches can most times be helpful if you intend to get around pretty fast and easy. Although, in some cases, there are lots of people who’re stuck with the option of knowing which of the suggested means of movement is more comfortable.

Not until recent times, the use of crutches used to be the only solution most people anchored themselves too whenever the need arose.

Today, most patients are given top-quality knee walkers or often iWalks as an alternative method of moving from one point to another after a surgery or an injury.  This is the main reason a lot of folks prefer the use of scooters than using crutches for mobility.

So, the question is, are knee scooters really better than crutches? And if so, how exactly? 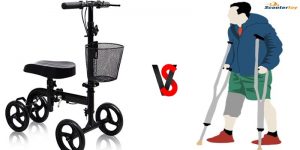 Crutches are one of the most issued devices to individuals who had undergone surgeries or injuries. Now, I will want you to consider crutches as tall canes pairs that can be placed below the arms. And your body weight is forced to balance evenly on two sides of the crutches as a result giving you the privilege to strike and maintain a balance while “hopping” on the other foot.

Importantly, it allows you to move safely and have out weight off the injured foot. The use of crutches is accompanied by lots of advantages, but similar to another medium of transportation, crutches also have its disadvantage as well.

The Pros of Crutches

The Cons of Crutches

Similar to most devices, in as much as they have their advantages, so also is some measures of disadvantages they are accompanied with.

The Pros of Knee Walkers

The Cons of Knee Walkers

As usual, the pros overshadow the cons of a knee walker, although the device still has some drawbacks we will want you to consider before going for any purchase.

Which One to Pick: Knee Scooters, or Crutches

If you have read through this entire piece, I can boldly say you have understood the pros and cons that exist when using knee walkers or crutches. So, now you can choose the right device you intend to use for mobility. Although each device has its pros and cons but seeking the attention of an expert can also help you make the right choice too.

“Hey, are you out of your mind?” - this is what I often hear when people see me performing some really dangerous stunts. While most people use scooters to commute, I use mine to hone my stunting skills. Yes, that’s me, Brian Smith. I’ve a small group of like-minded people in my team that love to do all sorts of stunts with their kick scooters and skateboards. My fans also ask me to teach them a thing or two every now and then. This is why I am here. In my leisure time, I like to write about what I do with my scooters and what I am going to do next. One thing I want to say to all my fans - Don’t hit the streets without proper information and training..