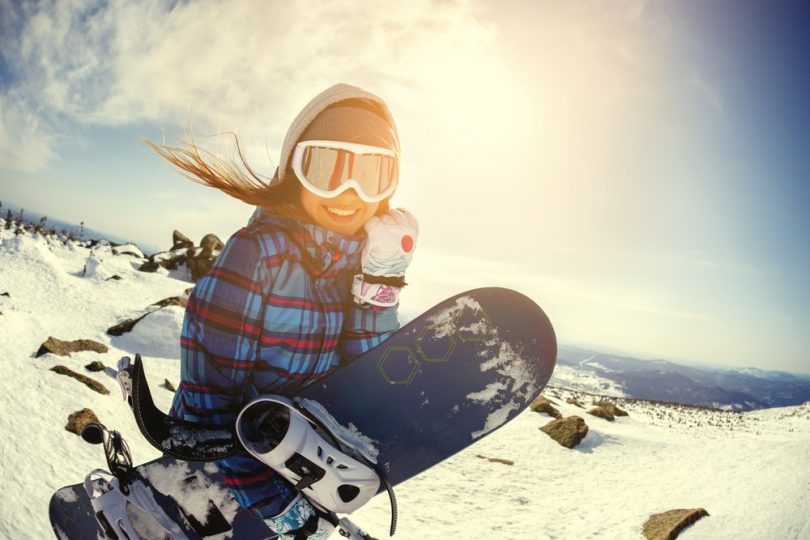 Snowboarding and skateboarding are two of the most famous board sports across the globe. Despite sharing some similarities in accessories and how you play, these sports also feature some specifications that set them apart.

If you’re interested in both of them, you might have some questions like what sets these two sports apart, or are the skills interchangeable, right? Well, we’re here to answer just that. This article will focus on an in-depth comparison between snowboarding and skateboarding so that you can make an informed decision. Let’s jump right in. 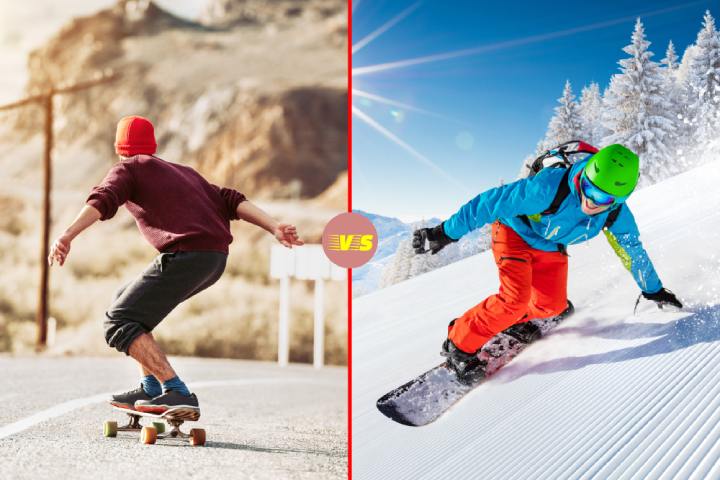 The stance on both boards is very similar about shoulder width. Even if the boards are longer, the stance will nearly be the same.

Skateboarding and snowboarding have a similar natural balance when riding.

With a skateboard, you have four wheels on the ground while the snowboard mainly uses the edge of the board.

Riding the snowboard flat is for more advanced users.

Getting onto the skateboard when you are on the pavement is going to make the board roll and possibly fly out from under you.

On a snowboard, you are connected to it, and it is parallel to the slopes making it pretty safe

When you lean on a skateboard, the four wheels actually turn.

But on a snowboard, there are no wheels, and leaning will make the board edge in to turn.

To accelerate with a skateboard, you need to be fit so you can push yourself to gain speed.

You’re going downhills when snowboarding. The board will naturally accelerate without you needing to.

Snowboards have a binding that your feet sit securely into while riding. On a skateboard, you can move your feet freely as you like.

Concrete is made up of coarse and fine aggregate connected together with fluid that hardens over time.

Concrete is very hard and is going to hurt when you hit it. You can skin your knees and elbows and even break bones.

Snow is soft and doesn’t hurt when you land on it.

Most times, snowboarding injuries occur when you land the wrong way or hit something else that isn’t snow.

It is easier to learn snowboard tricks than skateboards because your feet are connected with the board, and the snow makes it safe to land on.

However, some tricks can be harder since you cannot jump straight off a snowboard as you can on a skateboard.

To turn on a skateboard, you turn your wheels, but it forces the board edge to go into the turn on a snowboard.

Skateboarding is quite affordable, especially when buying a beginner’s board and some safety gear. You can expect to pay between $300 to $400 for a basic board, to begin with.

Snowboarding is more expensive as you need full snow gear, goggles, and the entry fee to the snow.

Skateboarding vs Snowboarding: The Similarities

If you are familiar with riding a skateboard, then a snowboard won’t take long to get used to. You have the regular stance and the goofy stance. Getting the posture right is important, especially when turning.

The goal of snowboarding is to stay parallel with the board and bend your knees and drop shoulders when on a steep.

The tricks and objects for snowboarding and skateboarding as similar to the big jumps, half-pipes, and verts.

If you are familiar with skateboarding, you are going to complete board slides and jumps easier than those without experience.

How Does Skateboarding Help Improve Snowboarding?

Both types of boards use similar riding stances.

You either ride with the left foot located at the nose of the board, which is the regular way, or the goofy way being the right foot at the board’s nose.

Riding switch is when you can achieve turns on both the goofy and regular.

Snowboarding vs Skateboarding: Which Is More Dangerous?

Skateboarding comes with a bigger risk of hurting yourself such as hitting the pavement with your head.

Snowboarding means you are riding a softer landing each time, but it can be hard to break your fall when your feet are connected to the board.

Beginners practicing tricks on their skateboards suffer more bruises on the lower legs and elbows if they are not wearing protective gear.

Snowboarding comes with a high risk of injury that can result when you fall downhill when traveling at high speeds.

Snowboarding on mountain areas can be dangerous if you are boarding on advanced slopes.

Skateboarding is riskier than snowboarding when you are at a beginner level.

Snowboarding becomes more dangerous as you get more advanced such as doing advanced kick tricks and commuting in traffic.

How to Stay Safe on a Snowboard? 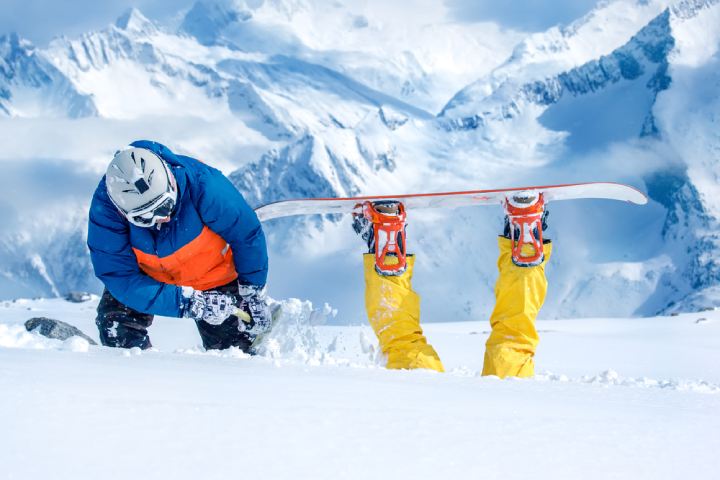 Use the right gear

You need the right gear to protect your body when snowboarding, including snowboarding boots and bindings, helmets, wrist guards, and goggles.

Goggles are important to protect your face from hazards, branches, and cold weather.

Dress for the weather

Snowboarding exposes you to harsh cold elements. It is important to protect your body with warm clothes like proper snow gear and wear thermal undergarments.

Avoid cotton material as this takes longer to dry when compared to wool or synthetic.

How to Stay Safe on a Skateboard? 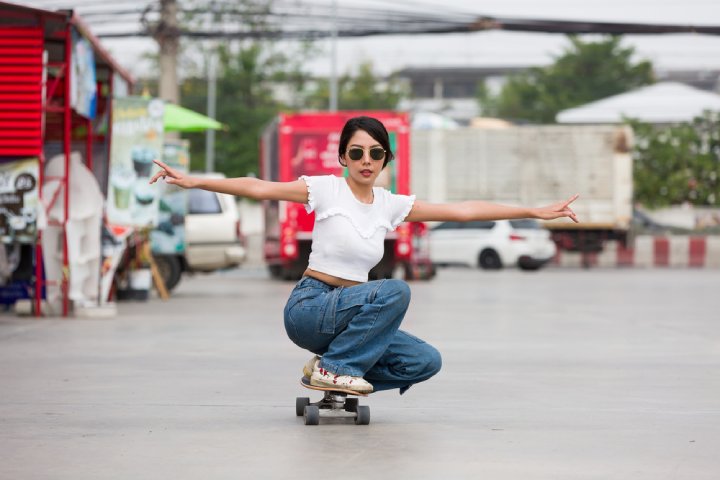 Ensure you empty everything out of your pockets before skateboarding. Ensure you have the right protective gear such as good-fitting shoes, helmet, and wrist guards, along with knee and elbow guards.

There are three parts to a skateboard. The trucks, wheels, and the board. The smaller decks are good for beginners. They are easier to handle and balance.

Ensure you use the right wheels for the type of riding, such as speed, freestyle, and downhill riding. Look for ratings in the board itself and aim for one with a rating suitable for the user’s weight.

Don’t ride near the traffic

You are at risk of injury when you ride in places where you can collide with pedestrians, bikes, and motor vehicles, both mobile and parked.

The truth is skateboarders of all levels fall. It isn’t just beginners. Many falls occur on irregular surfaces and when users don’t know the correct way to fall to avoid serious injuries.

Can I Do Both?

Snowboarding and skateboarding are great ways to spend time with friends and family. You can get fit by doing both and burning a lot of calories.

Each sport comes with its own risks, and it is important to wear the right gear and start slowly without rushing in. Once your grasp skateboarding, snowboarding will mostly come naturally.

Ans. The samba is a skateboard for snowboarders who enjoy carving. The deck is made to change the truck geometry, so it skates like nothing else that has wheels.

2. Should I wear a skateboarding helmet when snowboarding?

Ans. Never use any other helmet other than the type designed for that particular sport.

3. Can I snowboard on a skateboard?

Ans. Snowboarding and skateboarding are much the same. Going from a skateboard to a snowboard is simple. All you need to do is screw off the trucks and screw in the bindings.

Another reason I’ve got so good at it is because of my relentless practice sessions with my friends. As an environmental activist with an undergraduate law degree, I volunteer in different community awareness programs. I’m also into photography and do most of the photography for this site.